Meet Lucy. Our lovable Boston Terrier that likes to chew on lots of things she shouldn’t. Things such as: plastic toys, baby wipes, wooden blocks, plastic containers, shoes, pencils, Barbie feet (this was before I figured out how to upcycle disfigured Barbies!), as well as the usual rawhides, dog bones, and chew toys that she SHOULD be chewing on. 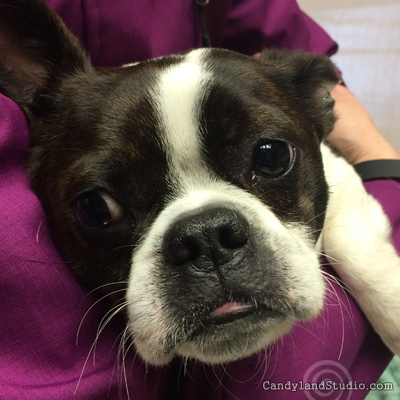 Try as we might, it is HARD to keep a house picked up 100% all the time with two little kids constantly leaving things around.  Plus, it doesn’t help that Lucy must’ve been a cat in a former life and she likes to jump on tables and counters and other places you wouldn’t expect a little dog to be.

So anyway, we found ourselves in a bit of an emergency situation last weekend because of her bad habit. That Sunday morning I was trying to sleep in, which equates to the late hour of about 8AM. Andy was already up, taking care of the girls so it was nice to have the chance to just stay snuggled in. Then I felt Lucy jump into bed with me. No big deal, sometimes she will lay there a bit or walk around, jump down and run off. She wasn’t there for very long when I heard a strange noise. My ninja-mom reflexes kicked in and I jumped up looking for a towel or blanket or something to catch what I knew was coming next.

I was super annoyed, got up and washed the bedding. At the time it didn’t seem like anything to worry about, maybe she drank too much water too fast, swallowed too much food without chewing it, etc. But as the day went on she continued to leave us little surprises around the house. =(

Finally Sunday night after we put her in her kennel for the night I decided that maybe we needed to take her to the doggie ER instead, and not wait to see our usual vet the next day. All I could think about was walking out in the morning to find her in worse shape, or even worse than that…I couldn’t risk it. She needed to be looked at. So Andy packed her up and off he went at 9PM Sunday night.

She passed the routine exam so the next step was more testing and x-rays; very costly procedures that may or may not explain her behavior. Did we want to agreed to a substantial deposit and continue? Yes, we must; something was definitely wrong with her, we needed to know, so more testing followed.

This is what they found on the x-ray: 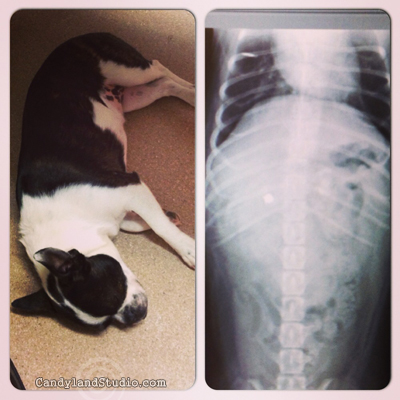 The good news is that surgery went well. The bad news is once they got in there they found this: 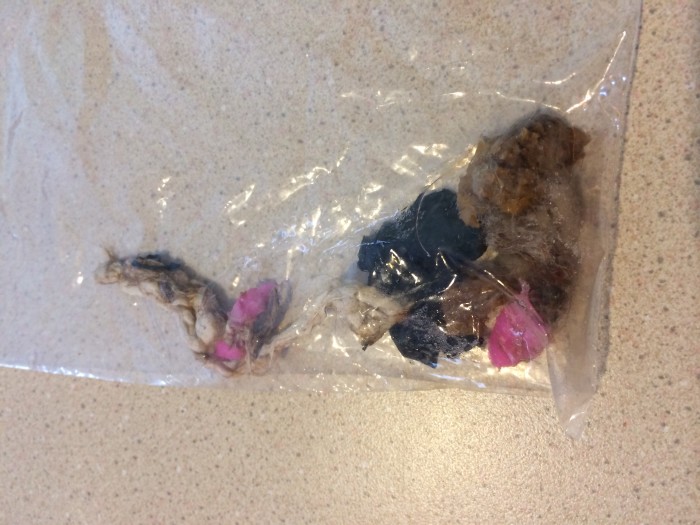 A whole string of stuff, plastic from toys, probably pieces from a wet wipe, stuffing from a stuffed animal…crap she had chewed up and swallowed days, if not weeks ago. Normally she might be able to pass the pieces, but instead it all  got entangled in her intestines. I guess the silver lining to her swallowing a metal object is that it showed up on the x-ray, otherwise they would not have found anything and we probably would not have agreed to exploratory surgery at that point otherwise. The additional bad news is they had to make THREE incisions to get it all out, which makes the recovery that much more difficult for a little dog.

We were allowed to visit her the next day and I didn’t realize how hard it would hit me when I saw her little body all stapled up and hooked to a morphine drip. I cried a little. 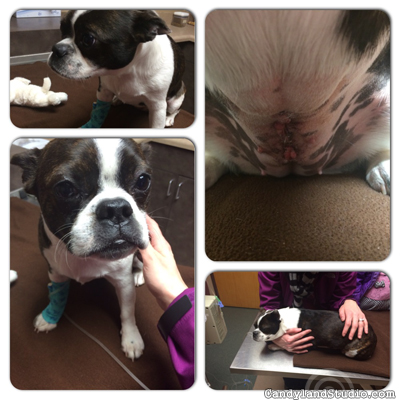 She was so sad, and scared, probably very confused and in pain. I held her for awhile and when she seemed uncomfortable they suggested we let her go back and rest. The girls had been doing good thus far, we tried to explain the situation as best you can to a 3 and 1 year old, but when she realized we couldn’t bring Lucy home with us poor Kayden exploded into tears, which got me going again. It was a rough ride home.

The next day at home was weird too. The girls go to preschool or daycare, so it’s typically I’m home alone working with Lucy. Normally she annoys me all day long wanting to go in and out, needs a drink, needs a snack…just like our kids! (Maybe I need to look into doggie daycare?!) But there was nothing all day, just silence. And as much as I WANT that most days, that day it was just sad.

I received call and financial update from the doggie hospital. Lucy was doing better, but still needed to eat. They thought she might be in better spirits and eat something if we came for another visit. They gave me the figure of our growing medical bill, as well as an estimate if we left her there another day. I cringed, but what can you do? We know she’s in good hands, she needs this, we will make it work.

Our second visit went SO MUCH BETTER than the first…she was so happy to see me, she nearly jumped off the table and into my arms! Her tail was wagging and she gave me lots of kisses! This was a huge relief. 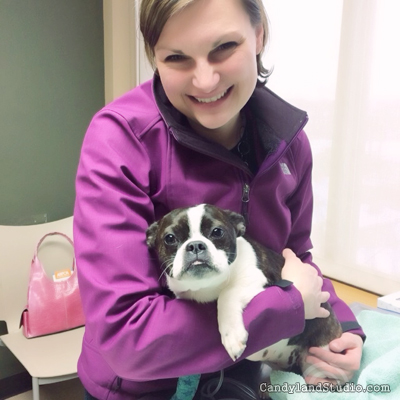 See?? Doesn’t she just LOOK better than the first photos?! She was happy to snuggle and have her ears rubbed. 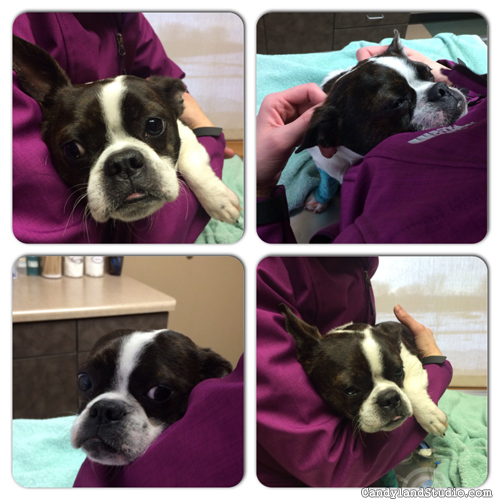 The doctors said she was doing much better, and managing her pain well so they would take her off the morphine drip and switch to oral pain meds. We all agreed that as much as we wanted her home, it would be best for her to stick around there for at least another night. Do we agree to the next estimated bill? :::sigh::: Yes, of course. At this point what’s another couple hundred dollars, right? :-/

We received an update on Wednesday that she continued to improve, but still needed to eat something. They asked if we would come in for a visit and bring her normal food. If we could get her to eat then we could take her home. When Andy arrived they told him that she had just eaten food they offered her, so that was good news; we could take her home later that night.

Now Lucy is home, recovering as best she can with two little girls who want to help and love on her and “take care of her”.  LOL We are all happy to have her back, and we REALLY hope this will be a lesson to her to stick to her own chew toys, but really, does she have any idea what happened? Very doubtful. It has certainly been a VERY expensive lesson to us to make even more of an effort to keep the toys and things out of her reach.

And we are looking into pet insurance, because there’s only so much we can do to control this situation. We would hate to think it will happen again, but honestly, how do you know for sure?! She’s technically still a puppy, so my hope is that she will grow out of this bad habit in the VERY near future, but if she doesn’t and we find ourselves in another emergency situation it would be very nice to have some insurance.

Since we don’t currently have pet insurance everything is out of pocket. Last time I checked it was $2,300. That’s a lot of money. It saved her life, and I’d pay it twice over if I had to save her again, but…That’s a LOT of money. Money that could’ve gone towards lots of things…new summer clothes for everyone and then some. Heck, a family vacation could cost less! But it is what it is. We’d like to think we are responsible pet owners and we know this can be part of the cost of owing a pet, unfortunately.

While we are not ones to ask for donations, I am however, extra motivated to work extra hard to pay off that debt. So, I’ve made a few “I Love Lucy” fundraiser items, and if you’d like to help out please check out the I Love Lucy Fundraiser photo album on my Facebook page. I will be posting various items and all the proceeds will go towards Lucy’s vet bill and continued care. If we raise more than we need I plan to donate some funds, but haven’t decided where they will go yet, we’ll cross that bridge when we get there. =)

Of course any sales made by Candyland Studio on Etsy or Amazon or even commission from my Perfectly Posh business will also make its way to that vet bill until it’s paid, so if you find something you like and you’re inclined to help out, please shop away!

Otherwise, if we appreciate all thoughts and prayers for Lucy’s speedy recovery.